Dr. Matt Hansen is Clinical Assistant Professor of Oral and Maxillofacial Diagnostic Sciences in the Division of Radiology and the College of Medicine at the University of Florida

Imagine a radiograph free of superimposition and distortion, cost effective, and easily tolerated.  Now imagine full manipulability, being able to reconstruct and reformat the radiograph in any plane you desire, and the ability to diagnose and treatment plan in 3-dimensions. It’s not challenging to visualize how this could benefit health care and lead to improved patient outcomes.  Indeed this is the very reason Computed Tomography (CT) has exploded, but dentistry lagged behind our physician colleagues in use of this technology.  There were many barriers.  Limited access to CT scanners, a higher cost, concerns of radiation exposure, and lack of familiarity were all reasons for under-utilization.  Where dentists saw a problem, imaging companies and scientists saw a solution and cone-beam computed tomography (CBCT) was born.

Cone-beam CT provided the advantages of more traditional multi-detector CTs utilized primarily in medicine, but without many of the drawbacks.  This led to rapid adoption by the field of dentistry. With the ability to now diagnose and plan treatment using 3-dimensional radiographs, CBCT is leading the digital revolution in dentistry and providing unparalleled information to drive clinical and patient confidence.

With this in mind, I wanted to share a few example cases where the Cone Beam scan played a vital role in patient diagnosis and treatment.

Among clinicians, few have benefited as greatly as endodontists with the introduction of CBCT.  The ability to view complex root canal systems, free from superimposition and distortion, has been a resounding success.  CBCT does not end at canal anatomy however.  The information gained about sinus pathosis, neurovascular channels in the vicinity of treatment, resorptive defects, and root fractures are invaluable. It is easy to see why new accreditation standards for endodontic residency programs include in-depth training in CBCT. It’s easy to promote the benefits of 3D imaging, but as they say:  a picture is worth a thousand words. To illustrate: An older female presented to her dentist with a chief complaint of sensitivity in the left maxilla.  Following clinical examination which localized the pain to the premolar region, a periapical radiograph was made. 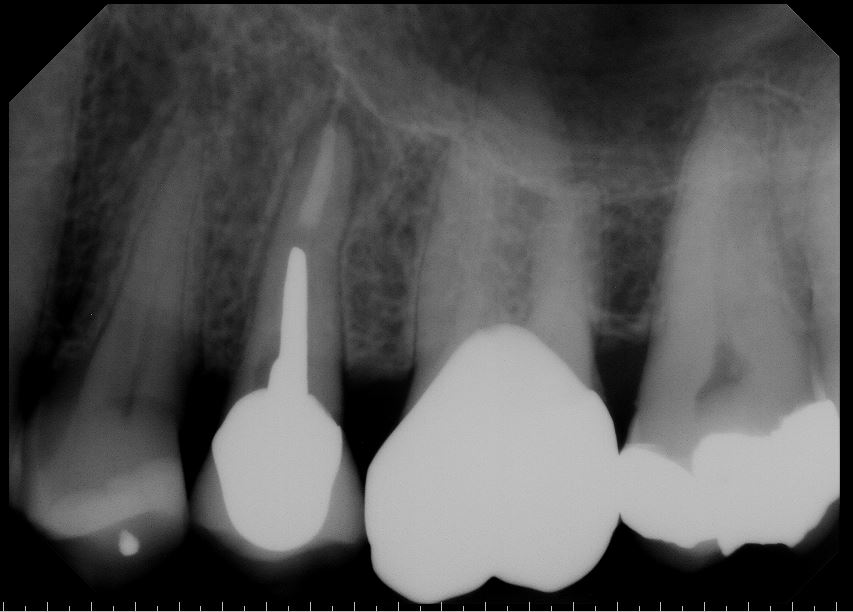 The radiograph depicted endodontically-treated 13 with a persistent periapical radiolucency.  The obturation of 13 was over-extended and re-treatment was planned. This is an everyday occurrence in dental offices throughout the country.  In terms of confidence, we know:

But do we know why?

Our treatment options depend on our diagnosis. How confident are you in your diagnosis? Neither was the clinician, so they asked for a CBCT. 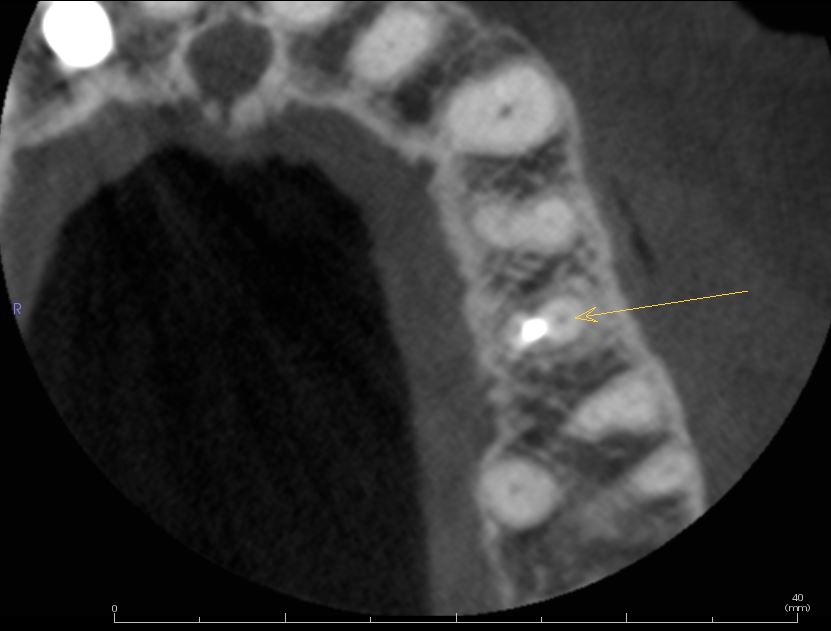 Implant dentistry has been another benefactor of 3D imaging. The ability to accurately assess bone quality and quantity, as well as the morphology and local anatomy, has dramatically increased the access of implant dentistry. Now one is able to accurately assess a site, plan the placement and surgery virtually, and then 3D-print a surgical guide. With these tools, implants are within the reach of all clinicians. It’s not just implant planning and guide creation that benefits us; it’s recognition of anatomy, accurately portrayed, that drives CBCT.

Let’s look at a case where the CBCT prevented violation or aberrant anatomy. This was an older gentleman with failing #14 interested in replacement with an implant.  A panoramic radiograph was made for initial assessment.

The panoramic depicted sufficient bone in the left maxilla and the patient was planned for extraction, socket preservation, and later implant placement. The patient’s healing was unremarkable. The socket preservation healed appropriately and aided in bone conservation. In preparation for surgery, a CBCT was made.  Fortuitously so, because it depicted the posterior superior alveolar neurovascular channel entering into the alveolar process at the surgical site. The yellow arrows point to the canal. 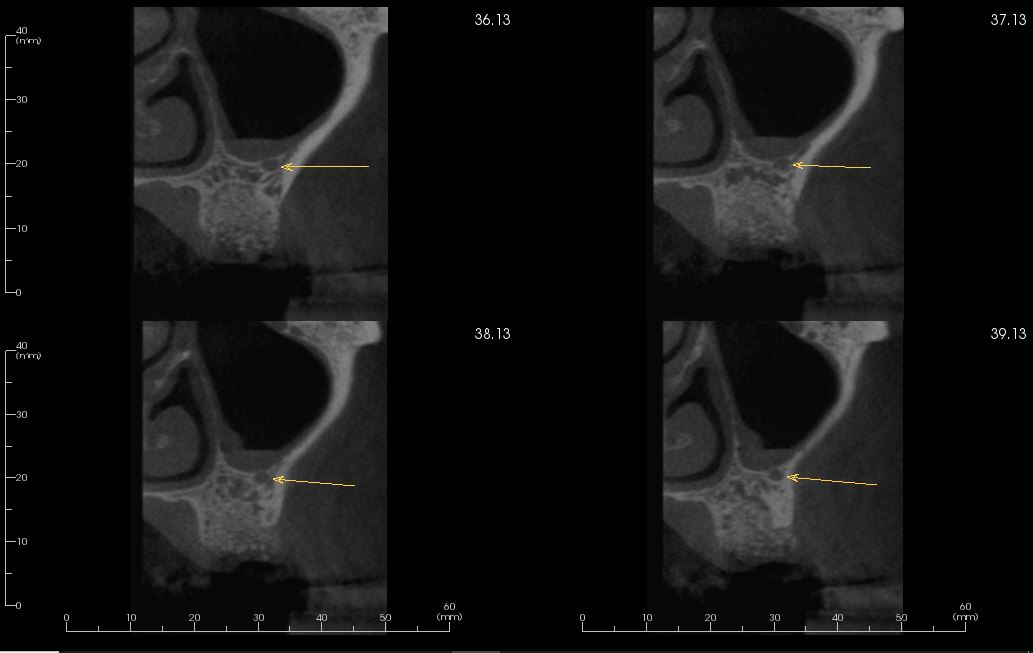 The posterior superior alveolar neurovascular channel is the conduit for the nerve and artery of the same name.  They arise, as branches of the maxillary artery and nerve, in the pterygopalatine fossa and extend inferiorly and anteriorly along the maxillary sinus wall.  The channel can be classified into 3 main types: a canal, a groove in the sinus wall, or a combination of an intraosseous and extraosseous route. Typically, the canal is located more superior on the sinus wall, far out of the reach of an osteotomy drill, but in this case the channel had descended into the alveolar process and was located at the apex of the proposed site.  Without CBCT, we would not know this vital structure was there until it was too late. CBCT is a game changer, not just on the planning side but also in avoiding complications.

When talking about avoiding complications, it would be remiss to not discuss the great strides CBCT has made in oral surgery procedures.  From neoplasm assessment to surgical planning, CBCT has revolutionized the diagnostic work-flow of surgical practice.  Tumors can be resected with confidence, Le Forts can be planned, and fractures can be approximated and fixated with accurate knowledge of the local anatomy. Now these are limited procedures outside the scope of a general dentist office, so most would ask how does this benefit me? Look no further than the third molars.

Third molar extraction is a common oral surgery procedure with some estimates of up to ten million wisdom teeth extracted annually. Many complications can arise from third molar extraction ranging from mild discomfort to paresthesia.  Mandibular canal location is of utmost importance when considering extraction of 17 and 32, and this is where CBCT shines. Previously a dentist could only rely upon cryptic signs such as canal darkening, narrowing, displacement, or interruption to determine mandibular canal. The sensitivity and specificity of this method tended to be poor in evaluating canal proximity. With potentially permanent and litigious complications, better evaluation is needed when there is doubt as to canal involvement.  Here is a panoramic radiograph reconstructed from a CBCT volume.

The panoramic depicted impacted 17 and 32, with 32 being in close proximity to the mandibular canal. A CBCT was clearly justified.  The volume was evaluated and the canal was identified for the clinician. 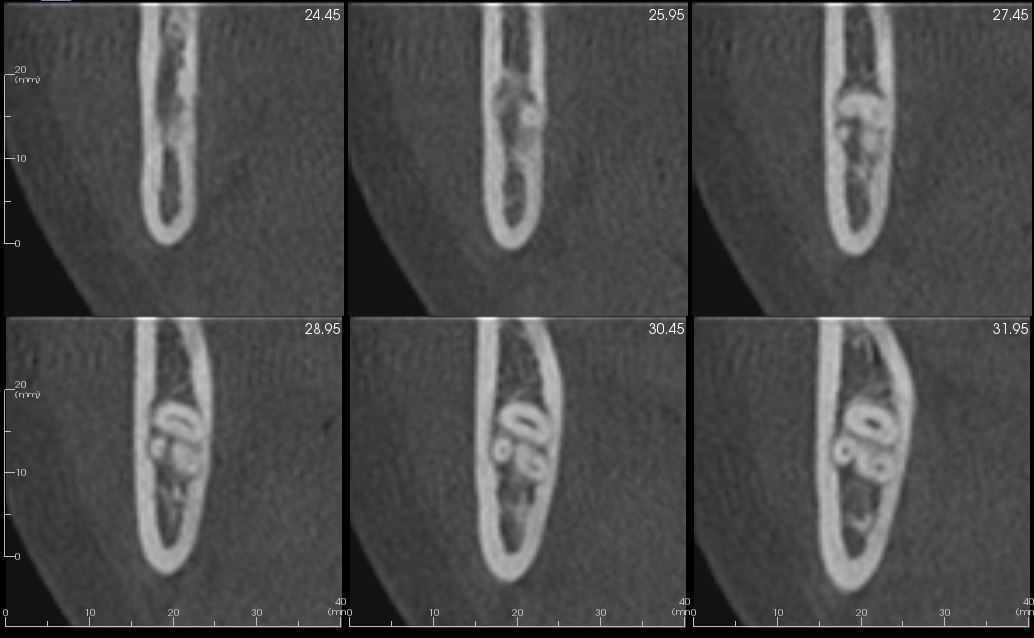 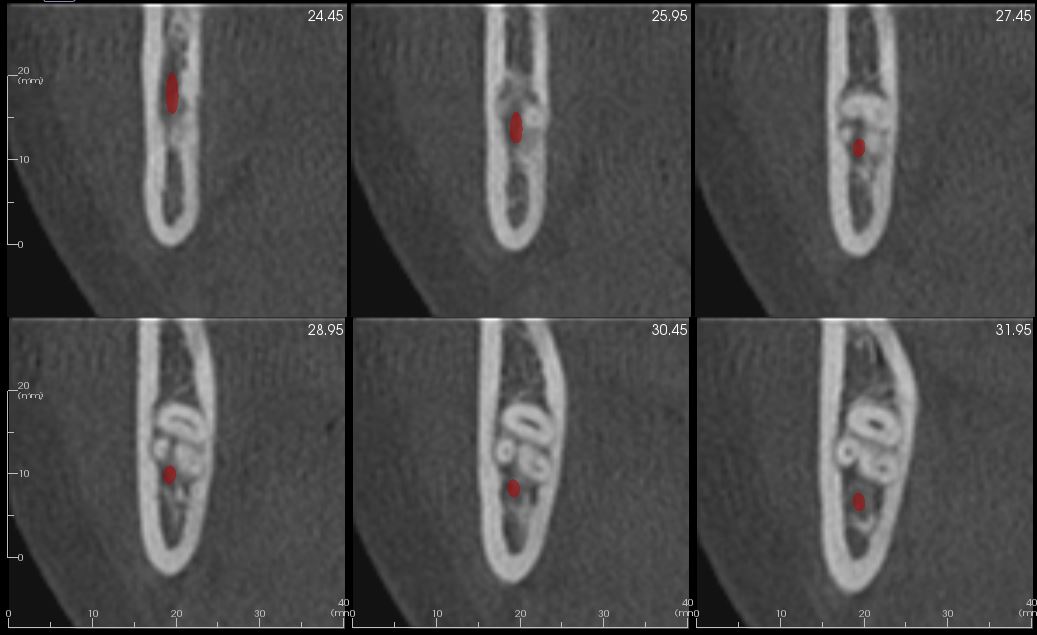 Upon review it was clear the canal contacted the roots of 32. A more interesting finding was noted in that the mesial root for 32 bifurcated at the apex and the canal traveled through this split. Having this information available enables the clinician to make confident and informed decisions, consenting or referring the patient as appropriate, and provide the appropriate treatment options.  An accessory mental foramen was incidentally noted in this study, an uncommon anatomical variant, and the patient was delighted to hear they were a rare and special individual. 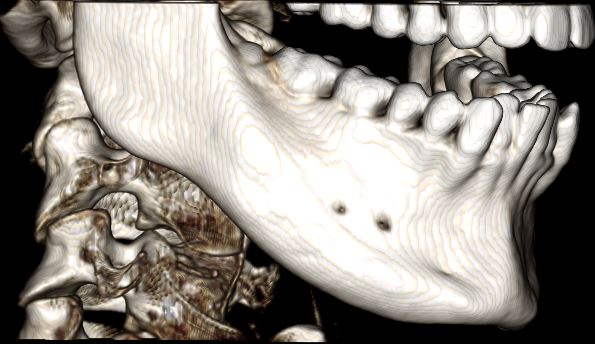 These are just a few examples of CBCT use in the modern dental office.  The diagnostic information gained combined with the efficiency, cost effectiveness, and relative low-dose of CBCT make it unparalleled in radiographic assessment.  Of course, with all the power that comes with 3D dentistry, having the equipment that maximizes your visibility will allow you to make the most from this modality.  The X-era CBCT from ImageWorks is the world’s first 0.2 mm focal spot CBCT, which will allow you to see most than you ever have.

Learn more about the X-era CBCT