One of the most common complaints we hear with many panoramic x-ray systems is lack of visibility of the anterior apices – both upper and lower.  The office staff will work very hard on their technique, and they will make sure their panoramic x-ray is precisely calibrated and aligned.  However, with some systems, they cannot consistently capture this anatomy.

While technique plays an important role, there are other factors at play, and an often-overlooked root cause may be the equipment.  This is because in many cases, no matter what is done, some equipment just doesn’t have the capability.

Why does this happen?

There are a number of factors that make it difficult to capture good anteriors in a panoramic image.  For instance, unlike other parts of the dentition, scanning the anteriors means the beam must travel through the spine, which means the panoramic x-ray must increase the power in the middle of the scan to account for the additional bone.  If the panoramic x-ray is not doing this properly, it can affect this region in the resulting image.  Another factor can stem from technique.  For instance, having the patient swallow and place the tongue on the roof of the mouth can also help enhance visibility in the maxillary region of the image.

However (unfortunately), even if all these other aspects are done correctly, the reality is that for many panoramic x-ray machines, they still won’t have the ability to capture this anatomy for many patients.  The reason for this is a combination of anatomy and the limitation of the panoramic x-ray equipment.

First, a quick explanation of how panoramic x-rays work.  Most panoramic x-rays, when they rotate about the patient, are capturing a U-shaped layer of data.  This is referred to as the “focal trough”.  Think of a rectangular piece of paper that is bent into an arc and placed on its side.

The anatomy that is captured in the panoramic radiograph is dependent on the location and the cross-sectional “thickness” of this focal trough.  If the anatomy falls outside of this U-shaped focal trough, it will not be clearly visible on the resulting image.  Because of this design, the anterior region is much more difficult to capture clearly in the panoramic image.  This difficulty stems from a few challenges that are working against the dental professional – some are obvious, and some are more subtle.

First, there is the obvious reason that the anteriors are just narrower than the posteriors.  There’s just less margin for error.

Second, for most of the dentition, the patient’s teeth are roughly vertical.  However, the anteriors (e.g. #8, #9, #24, #25) are typically not.   These teeth, particularly the mandibular anteriors, typically have a dramatic angle to their emergence profile.  As a result of this emergence profile, it can be very difficult (if not impossible on some patients) to capture the crowns and the apices of both mandibular and maxillary anteriors in the same scan.  This is because these points are not all in the same vertical plane. 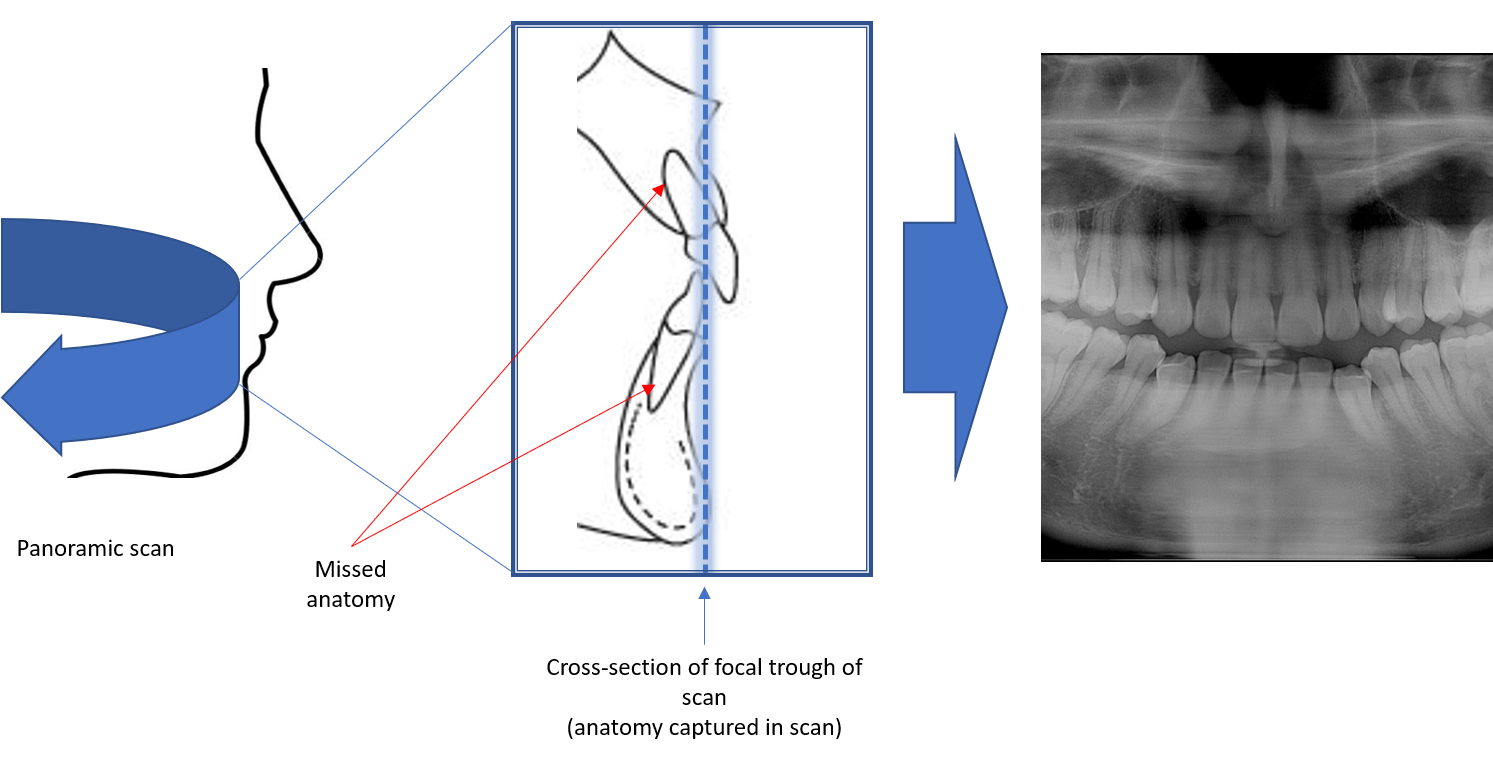 Third, the thickness of this focal trough (i.e. what anatomy can be captured) for most panoramic x-rays is also narrower when scanning the anteriors.  This is driven by the physics of the most machines that are designed to rotate within a very compact space.  This narrowing means that it’s even harder to capture the full length of both mandibular and maxillary anteriors (because there is even less margin for error). 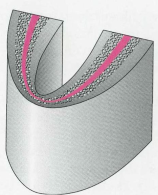 So what is a dental professional to do?  Simply resign herself to not getting good visibility into this region?  Take multiple scans with the patient in different positions?

There is another way

It’s almost like the dental professional has a stack of many panoramic x-rays with each representing a slightly different view of the anatomy – even those anterior teeth with dramatic emergence profiles. 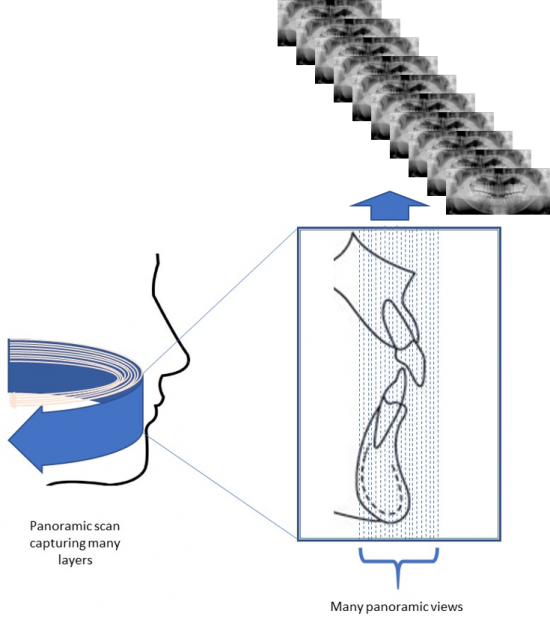 Let’s take a look at an example.

Here is a section from a typical panoramic radiograph.  In it, because of the reasons we just discussed, we can see that the image does not show the apices of the maxillary anteriors very clearly.

If this was taken with a panoramic x-ray that cannot capture multiple focal troughs, this would be the image the office would be stuck with.

Luckily, because the panoramic x-ray performing the scan has the ability to capture many focal troughs, the operator can choose from any of the other panoramic images that were captured in that scan.  Very quickly, the operator can select the image that reveals #8 and #9.  This image is from the same panoramic scan as the one above.  Same patient.  Same scan. 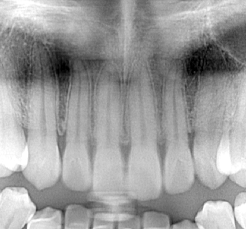 Similarly, with the mandibular anteriors, viewing the original panoramic shows lack of clarity in the apices. 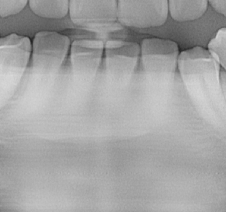 However, because this patient was scanned on a panoramic x-ray than can shift the focal trough, these apices can also be much better revealed.  Again, this is done simply by using the data captured during the original scan – no additional scans are needed.  You’ll notice that in this “layer”, the crowns are less visible.  This is because the maxillary anteriors have dramatic angles to the emergence profiles and therefore the crowns are in a very different layer than the apices.

Luckily, ImageWorks has you covered on this front.  The panoramic modality of both our 2D Panoura 18S Panoramic X-ray, as well as our X-era Cone Beam capture over 50 layers every time a pano is taken.  This is with no additional time and no additional dosage.  Furthermore, this is done automatically for every scan, so there’s also no additional clicking, adjusting or futzing by the operator.

In addition, it’s worth noting that the operator can easily save as many “layers” as they like in the patient’s study as separate panoramic x-rays.   Many of our offices will take advantage of this capability by storing multiple panoramic images for a particular patient scan because it’s so quick and easy to do so.  This allows them to take full advantage of all the information the system can offer.

If you would like more information or would like to see for yourself, give us a call.

Learn more about the X-era CBCT from ImageWorks

Learn more about the Panoura 18S Panoramic X-Ray from ImageWorks